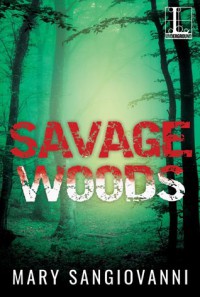 The woods are alive. At least that's what Mary SanGiovanni would like you to believe in her latest offering, Savage Woods. The Nilhollow section of New Jersey's Pine Barrens has had its history of weird happenings. People tend to go missing here. Think of it as New Jersey's answer to the Bermuda Triangle. This has dated back tens of thousands of years. The Native Americans knew this and avoided this area like the plague. But what causes it? SanGiovanni attempts to explain it by introducing us to a chasm in Nilhollow that is allowing the bad mojo to escape it and pollute the wood spirits like a plague. This causes the woods to constantly shift and trap anyone who enters and then the wood spirits form these little tree creatures to off their victims. If you suddenly went "Huh?", you're not alone. Savage Woods has a few good ideas surrounded by an absolute mess and that's the most frustrating part for me. SanGiovanni can write. I've read so-called authors who couldn't find a coherent sentence with two hands and a flashlight. She is not one of them. Unfortunately, the two stories of hers that I've read, she tries to take amazingly unrealistic material and breathe life into them. Instead, we get a laughable plot, uninteresting characters and pacing that makes a snail look like a top-fuel dragster. The possessed trees and vines in the Evil Dead. Now that was scary. Not so here. The tree creatures come off as hokie. Native American folklore can make for a great storyline, much like Brian Moreland did in The Devil's Woods and Dead of Winter. Again, not so here. She does throw in quite a bit of the red stuff, but you're beyond caring at this point and that makes the characters nothing more than cannon fodder. I simply found myself yawning through the whole thing eagerly anticipating the ending to come and put me out of my misery.

* this ARC was provided by NetGalley in exchange for an honest review.